About the statue | More information | Videos

The statue: A celebration and a legacy

This statue of Nelson Mandela in Glasgow celebrates the history of Scotland’s connection to the struggle against apartheid through the Anti-Apartheid Movement and is a legacy for future generations to learn about the key part Scotland played in taking action for human rights and challenging racism, and on taking action for a better world. Read more here.

On 4 August 1981, Glasgow awarded Nelson Mandela the Freedom of the City while he was still in prison – the first city in the world to do so. In Scotland, Aberdeen in 1984 and Midlothian and Dundee in 1985 also granted him freedoms. In 1986, Glasgow renamed St George’s Place – the home of the apartheid South African Consulate – as Nelson Mandela Place.

Nelson Mandela was welcomed by over 15,000 people in George Square when he visited Glasgow in 1993 to receive the Freedom of Glasgow and eight other cities and boroughs in person.

Known and loved around the world for his commitment to peace, negotiation and reconciliation, Nelson Rolihlahla Mandela was an anti-apartheid revolutionary and political leader. After 27 years in prison, he became South Africa’s first democratically elected president (1994-1999) when the African National Congress (ANC) came to power.

On 9 October 1963, he and 10 others were convicted of sabotage at the Rivonia Trial and he remained in prison until his release in 1990 and the subsequent overthrowing of apartheid.

At his trial he famously said: “I have fought against white domination, and I have fought against black domination. I have cherished the ideal of a democratic and free society in which all persons live together in harmony and with equal opportunities. It is an ideal which I hope to live for and to achieve. But if needs be, it is an ideal for which I am prepared to die.”

Apartheid (literally “apart-hood” in Afrikaans) was a system of racial segregation enforced by the ruling National Party in South Africa. Between 1960 and 1983, 3.5 million black Africans were removed from their homes and forced into segregated neighbourhoods as a result of apartheid legislation, in some of the largest mass evictions in modern history. Many South Africans died in the struggle – see more information on the Sharpeville Massacre and the Soweto Uprising.

‘When Mandela Danced in the Square’
In collaboration with the Nelson Mandela Scottish Memoriaql Foundation, thisd is a West of Scotland Development Education Centre (WOSDEC) resource to help second and third level learners to:-

Timeline of Nelson Mandela’s Life from the Nelson Mandela Foundation
His life, his imprisonment, the defeat of apartheid, and becoming President of South Africa.

Timeline of the Scottish Anti-Aparthied Movement
A brief history.

Robben Island Museum
The infamous prison where Nelson Mandela spent 18 of his 27 years, along with over 3,000 political prisoners during their fight to end Apartheid.

The Lilliesleaf Trust UK – Anti-Apartheid Legacy: Centre of Memory and Learning (opening in 2023) 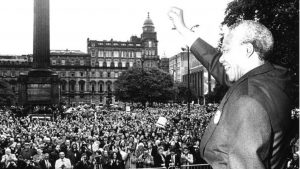 Prisoner of Apartheid – Freeman of Glasgow: 40th anniversary of Mandela being awarded Freedom of the City