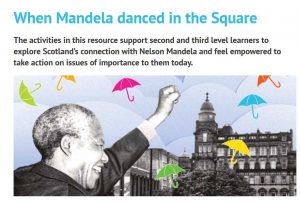 The  statue of Nelson Mandela is only the start of this project. It will be the focus for a long-term initiative to ensure that the lessons of the struggle against apartheid remain in the minds of future generations so that Mandela’s life, sacrifice and values can be as inspirational to them as it was for earlier generations.

The foundation has alread worked with WOSDEC (West of Scotland Development Education Centre https://wosdec.org.uk/our-resources/when-mandela-danced-in-the-square/) (see updates here in this site) to write and pilot a course for primary and early secondary pupils on apartheid in South Africa, on the life of Mandela and its lessons for human rights and challenging racism, and on taking action for a better world.

The pilot with schools in Glasgow will relate the work on Mandela to his strong links with the city and the planned erection of a statue of him in Nelson Mandela Place. The course will be designed to be used anywhere, however, and in places with their own historic connections these can be inserted locally.

To borrow the words of Michael McGahey, the campaign will be “a movement not a monument.”

The mission of the Foundation is to the advancement of heritage and education, particularly through increasing knowledge and understanding of: