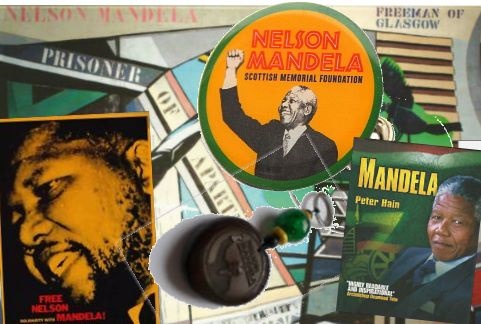 Support us by ordering our badge, books, posters, or cards – including Jim Cathcart’s iconic banner created in 1981 to celebrate Mandela’s being granted the Freedom of Glasgow. All over on our ebay page. 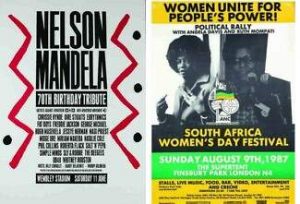 Courtesy of @AAMArchives our ebay site at http://bit.ly/mandelaebay now sells A2 copies of 14 more historic posters.

Freeman of Glasgow, Prisoner of Apartheid – order your cards of the iconic banner 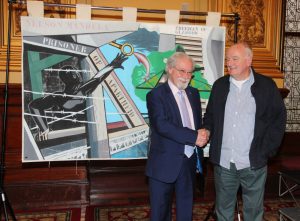 You can now support our campaign by ordering notelets and greetings cards of the  iconic banner ‘Freeman of Glasgow, Prisoner of Apartheid’, created in 1981 to mark Nelson Mandela being given the Freedom of the City when he was still in Robben Island prison.

After many years of searching, the banner was recently united with its creator, Jim Cathcart, by Glasgow Caledonian University Library & Archive. (@SaltireCentre) 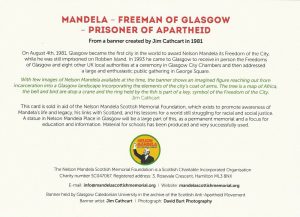 The notelet or greetings cards, blank inside, are in A6 or A5 sizes and packs of 10 and available HERE on ebay with funds going to the NMSMF campaign.

The photographs show the banner design on the front, and the explanatory text (see right) on the back of each card.

The cards have been produced by the Nelson Mandela Scottish Memorial Foundation to help raise the funds needed to erect a statue of Mandela in Glasgow, and for the related educational work.