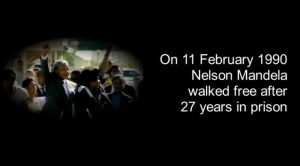 Scotland celebrated Nelson Mandela’s release from prison on 11 February 1990 with crowds gathering in Nelson Mandela Place in Glasgow, Edinburgh, Aberdeen, Dundee and across other Scottish towns and cities.

The Nelson Mandela Scottish Memorial Foundation (NMSMF) is marking the anniversary this year with a special nine-minute online video premiering at 6pm on Friday 11 February covering Scotland’s links to the event, the background, and the change it brought about.

It is part of its drive for funds to build a statue of Mandela in Nelson Mandela Place with a long-term education project about Scotland’s significant role in supporting the anti-apartheid struggle in South Africa.

That support had included Glasgow being the first in the world in 1981 to award Mandela the Freedom of the City, with Aberdeen, Dundee, and Midlothian all also granting freedoms of their authorities when he was still a political prisoner. He famously visited Glasgow to receive these in 1993 and said they: “Made us realise that the world hadn’t forgotten us.”

Brian Filling, chair of the NMSMF, said: “The video follows a well-received series covering significant events which has moved people to donate to help make the statue and its education programme a reality. We thank them and hope that support continues because we are nearly there.”

He stressed the importance of marking Scotland’s historic role in fighting apartheid and the ongoing need to continue tackling inequality and racism in society.

“A permanent memorial to Nelson Mandela will not only remind Scots of their proud history of solidarity with the South African people, but it will also educate future generations to stand up against racism and prejudice wherever and whenever it rears its ugly head.”

That history of solidarity saw huge support from Scotland and its anti-apartheid movement with practical help, boycotts, campaigning, a year-long picket of the South African Consulate, the renaming of the consulate’s address as Nelson Mandela Place, and the 30,000 strong Freedom March.

Glasgow’s first in granting of the Freedom of the City had a world-wide effect and kick-started 2,264 mayors from 56 different countries signing a declaration to the UN in 1981 demanding his release.

The video will be at https://mandelascottishmemorial.org/mandela-release from 6pm on Friday 11 February 2022 where people can also donate, and on Facebook @MandelaScottishMemorial and YouTube at https://youtu.be/H0jJf92sqPs