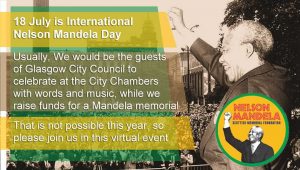 In 2019 the campaign clebrated the 25th anniversary of the first democratic election in South Africa and Nelson Mandela’s inauguration as President.

In 2018 the campaign celebrated the centenary of Nelson Mandela’s birth, which was also the 25th anniversary of his visit to Glasgow to receive the Freedoms of nine UK cities at a special ceremony on 9 October 1993.

Back to home page