As we get close to building the funds for a statue of Nelson Mandela in Glasgow’s Nelson Mandela Place, there are some significant anniversaries in 2021 we hope you will celebrate with us to help raise the remaining money. 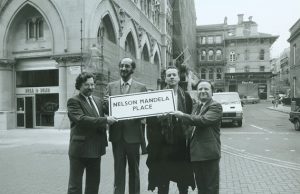 16 June 2021 marks the 35th anniversary of the re-naming of St George’s Place to Nelson Mandela Place, Glasgow. After the re-naming there was an AAM meeting in the Banqueting Hall of the City Chambers with speakers Essop Pahad (African National Congress), who later became a Cabinet Minister in the new South Africa; and Brian Filling, Chair of the AAM Scottish Committee, now Chair of NMSMF; Councillor Danny Crawford chaired the meeting.

Glasgow won worldwide acclaim by renaming St George’s Place as Nelson Mandela Place. With help from you, it can soon be the site of a long overdue statue of Mr Mandela. Donate here.

2021 is also the 35th anniversary of the year long weekly picket of the Apartheid South Consulate in Nelson Mandela Place. The Apartheid consulate was closed in 1992. The Anti-Apartheid Movement Scottish Committee was established in 1976.

4 August: 40th anniversary of Nelson Mandela receiving the Freedom of the City of Glasgow

On 4 August 1981, Nelson Mandela received the Freedom of the City of Glasgow while he was still incarcerated on Robben Island. This first ever freedom of a city for Mr Mandela kick-started 2,500 mayors from 56 different countries eventually signing a declaration to the UN in 1981 demanding his release. Mr Mandela received his award in person on on 9 October 1993.  He danced in Glasgow’s George Square and told the Scottish people “You declared us to be free!”

You can support our campaign by ordering notelets and greetings cards here of the iconic ‘Freeman of Glasgow, Prisoner of Apartheid’ banner created in 1981 to mark the event by Jim Cathcart.

You can find some more detail about these and other events in “The Glasgow Mandela Story” written  by Brian Filling, chair of the NMSMF. See more details and order it on Kindle at https://mandelascottishmemorial.org/the-glasgow-mandela-story

The learning resource about apartheid for primary and early secondary pupils, Mandela and his links with Glasgow and Scotland (“When Mandela danced in the Square”) commissioned by NMSMF and produced by WoSDEC has been well received by school students and teachers. You can see more about it here on our website and that of WoSDEC.