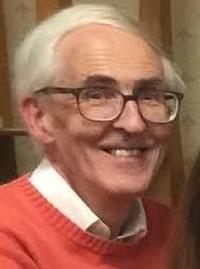 John Nelson’s interest in South Africa was kindled by attending an Anti-Apartheid Movement public meeting in Edinburgh in 1966. He became Secretary of the Edinburgh Anti-Apartheid Group, and then of the Glasgow Group when he moved there in 1972.

He encouraged co-operation between the handful of local AA groups in Scotland at the time, and in 1975 a Scottish Committee of the AAM was established as an informal meeting point for groups and a structure that could make approaches to other Scottish-level organisations and to bodies such as local authorities in areas where there was no local AA Group.

The Glasgow Group had already successfully asked Strathclyde Regional Council, Glasgow District Council and other nearby local authorities to adopt the boycott of all South African and Namibian goods, and the new Scottish Committee made it possible to make these requests more widely.

John was Secretary of this Committee, and when in June 1976 a more formally constituted Scottish Committee structure was set up he and Brian Filling became Secretary and Chair respectively, which they remained until the organisation was replaced in December 1994 by ACTSA Scotland – Action for Southern Africa – in which they have continued in those roles to date.

Throughout its existence the Scottish Committee worked for solidarity with the freedom struggle, to isolate apartheid and to challenge collaboration of all kinds with it, both through direct organisation and through co-ordinating activity by up to 28 local and student AA Groups.

Information and embarrassment were the key weapons, used especially through countless pickets of all forms of collaboration but also through leaflets, petitions, conferences, letters, marches and torchlight processions, questions at shareholder meetings, speaking tours and visits and also, not least, through such high profile events as the Freedom of Glasgow and other local authorities for Nelson Mandela.