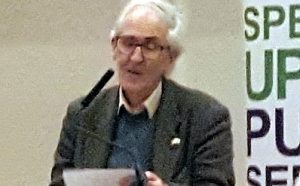 A meeting of UNISON Scotland branches representing 150,000 members gave a warm welcome to John Nelson, secretary of ACTSA, as he called for the union and its members to contribute to the campaign to create a statue of Nelson Mandela to celebrate his centenary.

Speaking to the 150 delegates at UNISON Scotland’s Scottish Council in Glasgow on 1 April, John said: “Trade unions were great supporters in the campaign against apartheid and for the release of Nelson Mandela. UNISON played a leading and significant role in the anti-apartheid campaign.

“We hope that UNISON Scotland, its branches and its members, will contribute generously to the campaign to create a statue of Nelson Mandela.”

John was invited by UNISON to speak at the meeting speaking on behalf of the Nelson Mandela Scottish Memorial Foundation.