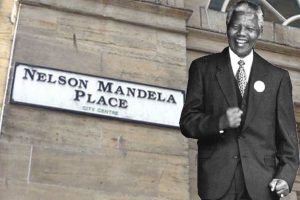 On the 25th anniversary of Nelson Mandela’s inauguration as president of South Africa on 10 May 2019, the campaign to raise funds for a Scottish memorial and education programme is stepping up a gear.

The Nelson Mandela Scottish Memorial Foundation campaign, launched by Sir Alex Ferguson in 2017, already has planning permission for a statue in Glasgow and is piloting a course for primary and early secondary school pupils to continue the legacy of Scotland’s close links with Mr Mandela and the anti-apartheid struggle.

As a testament to Scotland’s role, and just seven months before his inauguration in 1994, Mr Mandela chose Glasgow for his historic visit to receive the freedom of the city and that of many others. Glasgow was the first in the world to bestow the honour in 1981 while Mr Mandela was in prison. In Scotland, Aberdeen followed in 1984, Dundee and Midlothian in 1985, and Edinburgh in 1997.

On his visit to Glasgow in October 1993, Mr Mandela said: “While we were physically denied our freedom in the country of our birth, a city 6,000 miles away, and as renowned as Glasgow, refused to accept the legitimacy of the apartheid system, and declared us to be free.”

NMSMF Chair and Honorary Consul for South Africa in Scotland, Mr Brian Filling who organised Mandela’s visit to Scotland in 1993 and was a guest at his Inauguration as President of the Republic of South Africa in 1994, said:

“It was a great honour to be a guest at the inauguration of Nelson Mandela as President of South Africa in the Union buildings in Pretoria, for decades the citadel of apartheid.

“The event, attended by many world leaders, marked the end of apartheid and was the culmination of the long struggle against colonialism and apartheid by the South African people. Although it is 25 years ago I still remember the occasion vividly. Mandela in his inaugural speech said that ‘South Africa would no longer be regarded as a skunk among nations’.

The patrons of the Nelson Mandela Scottish Memorial Foundation include Glasgow Lord Provost Eva Bolander and ‘Freemen’ of the City of Glasgow, Sirs Alex Ferguson, Billy Connolly and Kenny Dalglish, and Lord Macfarlane of Bearsden. They are joined by the last two surviving Rivonia trialists, Denis Goldberg and Andrew Mlangeni, along with South African high commissioner Nomatemba Tambo.

Donations to the to the campaign can be made online at https://mandelascottishmemorial.org/donate