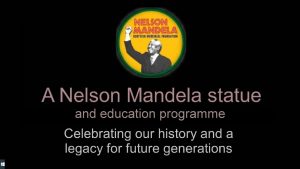 On 4 August 2021, the Nelson Mandela Scottish Memorial Foundation (NMSMF) is marking the 40th anniversary of Glasgow’s world-leading award of the Freedom of the City in 1981 to Nelson Mandela while he was still in prison, with an online video called “Prisoner of Apartheid, Freeman of Glasgow” which includes first-hand details about the background to the decision.

Glasgow was the first in the world to grant Mandela the Freedom of the City and the Lord Provost in 1981, Michael Kelly, took the issue to the United Nations that year resulting in 2,264 mayors from 56 countries signing a declaration demanding Mandela’s release.

As well as a revealing conversation about the background to the award between Brian Filling, Anti-Apartheid Chair in 1981 and now Chair of the NMSMF and Honorary Consul for South Africa in Scotland, and Michael Kelly, the video will also feature contributions from Glasgow Lord Provost Philip Braat and South African High Commissioner Nomatemba Tambo, along with archive photos and footage and a poignant performance from Robben Island prison by an Ayrshire Fiddle Orchestra soloist.

It will also feature a recently re-discovered banner made by Jim Cathcart in 1981 to mark the event. More details at https://mandelascottishmemorial.org/freeman-of-glasgow-prisoner-of-apartheid-order-your-cards-of-the-iconic-banner

Brian Filling led the Anti-Apartheid campaign for the award in the lead up to the 1981 decision. He said: “Looking back on these 40 years since the award of the Freedom of the City to Nelson Mandela, it was an auspicious moment in Glasgow’s history and played a modest, but important, part in the struggle for the freedom of the South African people and Nelson Mandela.”

In the video Michael Kelly reveals that it was not all plain-sailing after the Labour group took up the campaign: “There was a lot of opposition in the general public and certainly from the media in Glasgow who were quite hostile to the City Council doing this”, he says.

He explains that, after months of campaigning and education about apartheid, and when people could see the level of international support with so many countries attending the award ceremony in Glasgow, they began to believe “that it was their idea and Glasgow took the cause to their heart. I’m very proud that Glasgow actually did that because we were on the right side of history”, he adds.

His abiding memory is that Mandela told him directly: “It made us realise that the world hadn’t forgotten us.”

If any confirmation was needed, it came from Mr Mandela on his visit to Glasgow in 1993. He said: “While we were physically denied our freedom in the country of our birth, a city 6,000 miles away, and as renowned as Glasgow, refused to accept the legitimacy of the apartheid system, and declared us to be free.”

Following its launch in 2017 by Sir Alex Ferguson, the NMSMF has been steadily raising funds, planning permission for the statue is in place and an education programme for schools is already under way. The drive is on for the final £10,000 needed to launch a competition for the statue.

Brian Filling said: “While Mr Mandela was in prison, many ordinary people in Scotland organised and acted to make sure the world would know about him and the fight against Apartheid.

“That’s why we want today’s generation to join us in raising the funds to make this statue one that they can see as theirs – a ‘people’s statue’ – and an information and education programme to remind future generations of the key part Scotland played in taking action for human rights and challenging racism, and on taking action for a better world.”

Information for editors
The online video event will air at 6.30pm on Wednesday 4 August 2021 – on Youtube https://youtu.be/4oX2Jd7C6aE , Facebook at https://www.facebook.com/MandelaScottishMemorial and the Foundation website at https://mandelascottishmemorial.org/40years where there is a short trailer for the video.