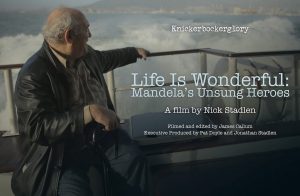 On the 29th anniversary of Mandela’s release, Nick Stadlen’s film “Life is Wonderful: Mandela’s Unsung Heroes” on Denis Goldberg and others in the Rivonia trial will be showing at The Lighthouse, 11, Mitchell Lane, Glasgow at 7pm Mon. 11th February. Free tickets from https://tinyurl.com/ybfkl3de

The film is an account of the Rivonia trial (where Mandela and seven others were sentenced to life imprisonment) that focuses on three other trialists – Denis Goldberg, Andrew Mlangeni and Ahmed “Kathy” Kathrada – as well as three of the lawyers who conducted their defence, and other participants.

The title is from Denis Goldberg’s exclamation from the dock when the sentence of life imprisonment was passed instead of the expected death. Many in Scotland have been privileged to know Denis from his many visits here.

The showing will be followed by a Question and Answer session with the Director and Producer Sir Nick Stadlen, a former English High Court judge who, after speaking of a life-changing day with Denis Goldberg which led to the film, describes his experience of making this film thus: “I was immensely impressed by the courage, integrity and vision of this small group of black, white and Indian idealists who said: Not on my watch. Not in my name. In the words of Andrew Mlangeni, they were a multi racial band of comrades who fought for a multi racial democracy. It has been a humbling and inspiring experience to learn their stories and share them with a wider audience”.

The Nelson Mandela Scottish Memorial Foundation is privileged to have both Andrew Mlangeni and Denis Goldberg, the last two surviving Rivonia Trialists, among our Patrons. This showing coincides with the mounting of the amazing Mandela Centenary Exhibition at The Lighthouse until 2nd March, with a small subsidiary display of historical material about the Anti-Apartheid Movement in Scotland.