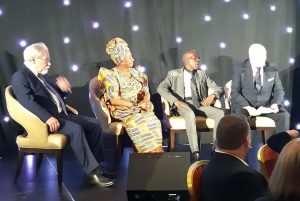 The campaign for a statue of Nelson Mandela in Glasgow and a long term project to ensure the lessons of the struggle against apartheid remain in the minds of future generations stepped up a gear with a fantastic fundraising dinner last night.

The stories from Marah and Brian who knew him well drew a picture of a colossus in the movement, an inspiring leader, and a warm, funny and ordinary person who engaged naturally with people. He saw everyone he spoke to as important and they got his full attention.

This was also reflected in a speech on video by Sir Alex Ferguson that launched the campaign last October and the dinner last night.

All were agreed that our role was to carry forward the legacy of Mandela by restating an active commitment to human rights, equality and racial harmony.

Anita Manning, auctioneer and presenter on the BBC TV shows ‘Bargain Hunt, ‘Flog it’ and ‘Antiques Road Trip’, then launched energetically into an auction that raised substantial funds for the campaign, alongside a silent auction and raffle.

The last hour saw a fantastic performance by Marah Louw as she moved the audience with the power of her passion and lifted them with her music from the political, to Lennon, the Lion King, and an accomplished jazz/swing medley as she danced around the tables. Soon the audience was up and dancing with her. 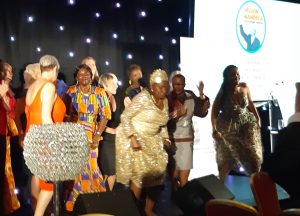 She finished on a powerful and moving song addressing gender violence, bringing the women from the audience up on to the stage with her.

The night was expertly compered by Dave Anderson.

This hugely successful event will bring us closer to the funds needed to build the statue and more importantly the programme to ensure the legacy of Mandela and the fight against apartheid is not forgotten.

You can donate by clicking here.