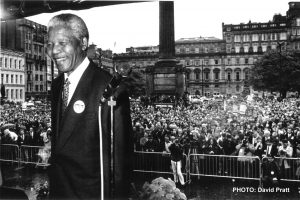 A personal memory from one of those who saw Mandela in George Square in 1993.

“As we watched him come down the scaffolding stairs to the empty space between the back of the stage and the city chambers, the South African national anthem struck up behind him.

“It was pouring down but Mandela stopped and stood to attention halfway down the stairs, with nobody to see him, getting drenched as the assistant with the brolly had been left a couple of steps behind. A statement that he was now responsible for a nation as well as a movement.

“I looked to the right. The only other people watching this were the woman from Namibia, me and, in front of the city chambers, a line of Glasgow polis standing to attention and saluting the man. Such a powerful vision that it still moves me to relate it to this day.”