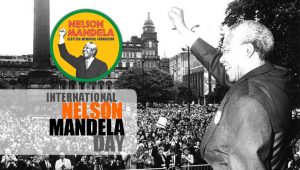 The Nelson Mandela Scottish Memorial Foundation (NMSMF) is marking United Nations Nelson Mandela International Day on 18 July with an online celebration and is calling on people in Scotland to join the final push to fund a statue of Mr Mandela in Glasgow’s Nelson Mandela Place along with an education project in Scottish schools.

Covid means that the usual public event is again being replaced by an online video event at 1pm on Sunday 18 July – on Facebook at https://www.facebook.com/MandelaScottishMemorial and the NMSMF website at https://mandelascottishmemorial.org/mandeladay .

The virtual event will feature iconic South African music star Marah Louw who famously danced with Mandela on the George Square stage in Glasgow in 1993, and the Mzansi South African Youth Choir.

There will be contributions from Brian Filling, Chair of the Foundation, and the late Denis Goldberg, a patron of the Foundation and regular visitor to Scotland, who was sentenced with Mandela and spent 22 years in jail for fighting apartheid. He carried on campaigning until his death last year.

There will also be voices of a teacher and children from a podcast by the West of Scotland Development Education Center (WOSDEC) about their experiences of the education programme developed along with the NMSMF.

Following its launch in 2017 by Sir Alex Ferguson, the Foundation has been steadily raising funds, planning permission for the statue is in place and an education programme for schools is already under way.

Fund-raising has included major events but also individual donations and initiatives like kilt walks and birthday and retirement donations. The push is now on for the remaining £10,000 needed to reach the target to commission the statue.

Brian Filling, NMSMF Chair and Honorary Consul for South Africa in Scotland, said: “While Mr Mandela was in prison, many ordinary people in Scotland organised and acted to make sure the world would know about him and the fight against Apartheid.

“That’s why we want today’s generation to join us in raising the funds to make this statue one that they can see as theirs – a ‘people’s statue’ to remind future generations of the key part Scotland played in taking action for human rights and challenging racism, and on taking action for a better world.”

Scotland was at the centre of the campaign for Mr Mandela’s release from prison. The first ever freedom of a city for Nelson Mandela came from Glasgow in 1981 and we will be celebrating the 40 year anniversary of that on 4 August. It kick-started 2,264 mayors from 56 different countries eventually signing a declaration to the UN in 1981 demanding his release.

The pure Glasgow gesture of renaming the home of the Glasgow South African Consulate as Nelson Mandela Place in 1986 won worldwide acclaim – and Mr Mandela never forgot it as he told the 15,000 crowd in Glasgow when he visited the city in 1993.