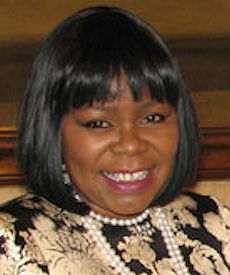 Nomatemba Tambo is the former High Commissioner to the UK and Ireland. During her period of office in the UK (2018-2022) she visited Scotland on many occasions and worked closely with the Nelson Mandela Scottish Memorial Foundation. Tembi Tambo has agreed to continue her support and remain a Patron of the Foundation.

Nomatemba “Thembi” Tambo is the daughter of legendary anti-apartheid politician Oliver Reginald Tambo. She has previously served as the South African ambassador in Rome.

She has also served as the head of the Tambo Foundation.

Ms Tambo received her BA in History and English at Roehampton Institute in London. This was followed by her LLB Post Grad Law at University of Witwatersrand in 2002. In 2007, she completed her diplomatic training.

She is the Director of both Women in Capital Growth (a black empowerment company) and Webnet Solutions. She is also the CEO of Evening Star Manufacturing. Since 2008 she has been involved in diplomatic work, between 2008 and 2012 she was the South African Consul General in Hong Kong.

She is also the Co-Founder of the South African Women’s Chamber of Commerce as well as a member of the International Women’s Forum.