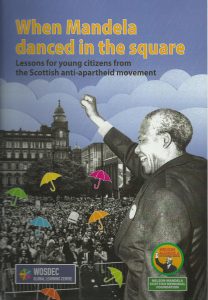 In commemoration of Nelson Mandela’s visit to Glasgow on 9 October 1993 to receive the Freedoms of 9 UK cities, the Nelson Mandela Scottish Memorial Foundation (NMSMF) is launching a Crowdfunder appeal to raise the remaining money required to create a statue of Nelson Mandela in Scotland.

The Crowdfunder (“Scotland’s Mandela Statue – Make it Happen”) – click to donate – will be running during Black History Month in October to raise the remaining £20,000. NMSMF has already raised some £130,000 towards the cost of the £150,000 statue.

A large Granite block has been sourced from South Africa and it will be finished in Aberdeenshire to create the plinth for the statue to be sited in Glasgow’s Nelson Mandela Place. Planning permission has been received and trial trenches will be dug during October to check for any underground services not discovered by earlier radar surveys. When the remaining money is raised a competition for the sculpture will be launched.

Glasgow was the first city in the world to grant Mandela the Freedom of the City in 1981 while he was still incarcerated on Robben Island. Following Glasgow’s initiative 8 other UK Local Authorities followed in awarding him the Freedom of their cities.

They were Aberdeen, Dundee, Midlothian District in Scotland; Newcastle, Sheffield, Hull and the London Borough of Greenwich in England; and Islwyn in Wales.

All 9 UK cities came to Glasgow on 9 October 1993 to present Nelson Mandela with their Freedoms at a special ceremony in the City Chambers. Afterwards Mandela addressed a crowd of some 15,000 in George Square.

Brian Filling, Chair of the NMSMF, said, “A permanent memorial to Nelson Mandela in Scotland will remind Scots and visitors of the proud history of solidarity with the struggle against apartheid and will also educate future generations on the need to stand up against racism and injustice whenever and wherever it rears its ugly head”.

“That history of solidarity saw huge support from Scotland and its anti-apartheid movement with practical help, boycotts, campaigning, a year-long picket of the South African Consulate, the renaming of the consulate’s address as Nelson Mandela Place, and the 30,000 strong Freedom March from Glasgow Green to London”.

“We are within sight of creating the statue thanks to the support of many individuals and organisations and with this final push we will make it a reality”.

The Crowdfunder (Scotland’s Mandela Statue – Make it Happen!”) has already received many endorsements and pledges of support.

The Lord Provost of Glasgow, Councillor Jacqueline McLaren, said, “It is a great pleasure to support the Scottish Nelson Mandela Memorial campaign.

“Glasgow holds Mr Mandela’s memory close to its heart and it is only fitting that his historic achievements and great personal sacrifices are honoured by the erection of a statue in the city to remind future generations of his struggle to topple apartheid in South Africa.

“Of course, Glasgow was the first city in the world to grant the revered civil rights campaigner Freedom of the City while he was still incarcerated in 1981 and it was a joyful and momentous occasion when, finally freed, he was able to travel here to receive the honour in person in 1993. 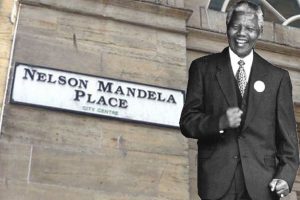 “In 1986, prior to his release, Glasgow named Nelson Mandela Place in support of the man who had become the world’s most famous political prisoner and in 1988 Glasgow Green was the starting point for the epic Nelson Mandela Freedom March to London.

“I’m told the great man, who went on to become South Africa’s first Black President, never forgot the support Glaswegian’s showed him during his incarceration. And even after his sad death in 2013, the city’s links with his family live on. Indeed, it was an honour for Glasgow to welcome his grand-daughter, Tukwini, to his birthday celebrations here during the 2014 Commonwealth Games.

“No one who lived through those historic times will forget the name Nelson Mandela and I believe a statue is a fitting tribute to ensure the Noble Peace Prize winner and all he stood for, are forever remembered in Scotland.”

Marah Louw, the South African singer and actor, who danced with Nelson Mandela in George Square in Glasgow and is a Patron of NMSMF, wrote,

“When I was a young girl, living in Soweto, never in my wildest dreams did I ever imagine that I would meet Nelson Mandela.

“But in 1990, when Madiba came out of prison there was a concert at Wembley Stadium with artists from around the world performing to welcome Madiba and I was asked to perform. I thought I was dreaming.

I travelled to London and performed in front of Nelson Mandela and the more than 80 thousand people packed into Wembley Stadium. A highlight for me was when he came backstage after my performance to greet me.

“My unforgettable highlight of all highlights, was in 1993, when Brian Filling (Chair of the Scottish Anti-Apartheid Movement) invited me to come to Scotland and perform at the prestigious event where Nelson Mandela received the Freedom of Britain, in George Square, in Glasgow.

“I was pinching myself and sincerely humbled and overwhelmed for another opportunity, to meet Tata Madiba, my President. It is an honour and privilege to participate in the drive to build this statue in honour of the great African statesman, Nelson Mandela, in Glasgow.”

The actor, David Hayman, wrote, “What a wonderful endeavour!

“When I think of all the heroes I have had in my life, those who’s inspiration and moral courage have meant so much to me, Nelson Mandela has to be top of my list. He was an extraordinary World Leader who inspired millions of people to believe that a better World is possible.”

“Statues are more than just pieces of stone they symbolise relationships worthy of memory and respect! The relationship between the peoples of Scotland and of Africa was critical in overcoming the monumental evil of racism through Scotland’s support for the work of the Anti-Apartheid Movement.

This statue will be a reminder not just of the struggle against racism but of the need for eternal vigilance against all forms of injustice and the continuing need for the activism and sacrifice that Nelson  Mandela embodied!”

Baroness Helen Liddell said, “It is a wonderful initiative to have a statue to commemorate such a great man and such an important fight. Our children and grandchildren need to know the story of Mandela to ensure what he suffered is never repeated and to prove that peaceful protest, around the world, can be successful.”

Lord Peter Hain, long-time anti-apartheid campaigner, in supporting the campaign for the statue, commented, “It is a great project to commemorate the greatest global icon of the 20th century. Mandela was the leader for justice, equality and freedom”.